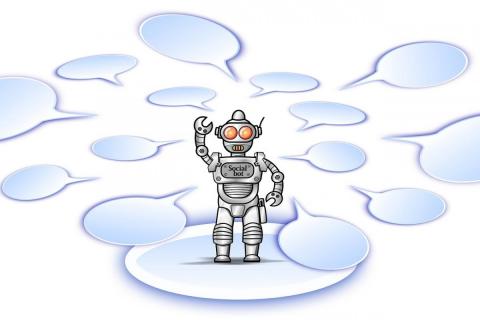 On March 22, 2019, Abdullah Alrhmoun and Teodoro Criscione presented their PhD research proposals at the Department of Network and Data Science.

Abdullah’s work will focus on the detection of online bots in social media networks. Social bots are computer programs that interact with human users in online social networks, and due to their adaptive behavior, it can be a challenge to detect them. One out of 200 messages in social media today are bot-generated, and about 5% of the activity of all social apps are performed by bots. They are able to collect information about human users, study their profile, and even mimic their behavior.

Methods employed so far in the detection of online social bots focused either on machine learning approaches or on graph-based strategies. Machine learning methods take into account only user attributes, such as ID name, gender, number of posted messages and number of shared messages, while graph-based methods also take into account the structure of the social graph, that is, the nature and intensity of interactions among users. Taking advantage of the new opportunities afforded by availability of massive amounts of data, Abdullah intends to combine these two modeling approaches, in order to improve our ability to detect and understand online social bots, with a view to generate bot-killing bots.

Teodoro is going to investigate collaborative credit systems and how they are related to the underlying social network. Collaborative systems are projects in which people exchange goods and services outside of the official financial system, relying on a self-organized framework. Teodoro pointed out that such alternative economy systems commonly appear after major crises of the official system, as was the case in the 1930s and in the last 10 years. His first case study is centered on Sarafu Credit, a current program being developed in rural Kenya. With the help of surveys carried out in a participant village, the network of social relationships between residents will be uncovered. Through comparing the structure, analyzing the robustness and studying the coupled dynamics of the networks of economic transactions and social relations, he hopes to develop new strategies and propose concrete recommendations to boost wealth generation for villagers, and so increase the benefits of collaborative credit programs.