On March 5, the speaker at the CNS Research Colloquium was Rebeka O. Szabó, who gave a talk on the topic of "The impact of role structure and the evolution of temporal social network on collaborative project teams’ performance". Rebeka is a first year PhD student at the Center for Network Science with particular interest in social networks, organizations and evolution intertwined with themes of cooperation, social inequality and knowledge diffusion.

In her PhD research, Rebeka aims to explore new approaches in organizational and managerial studies by focusing on two questions: How the static network of an initial role structure influences the evolving social network across time and how this emerging interactional pattern contributes to the success of teams’ problem-solving on a temporal scale. To examine these topics she uses data from escape rooms, which can be considered as a half-laboratory, half-experimental setting. (The entire group process takes place in exactly the same, controlled environment for all teams under comparison.) Furthermore, this setup can credibly mimic labor characteristics and the organizational environment of project teams, as the players are operating under time pressure and they perform a collaboration-demanding, non-structured task using two predominant activities: exploration and idea-sharing.

To extract data for her research, Rebeka uses video recording of the games (originally serve the purpose of preventing inadequate acts) which makes it possible to avoid biases of self-reports and the feeling of being watched. It also provides the opportunity to observe real-time, ongoing interactions, which she codes in minute-based time windows. From this information it is possible to create a temporal network and measure its characteristics during the games. 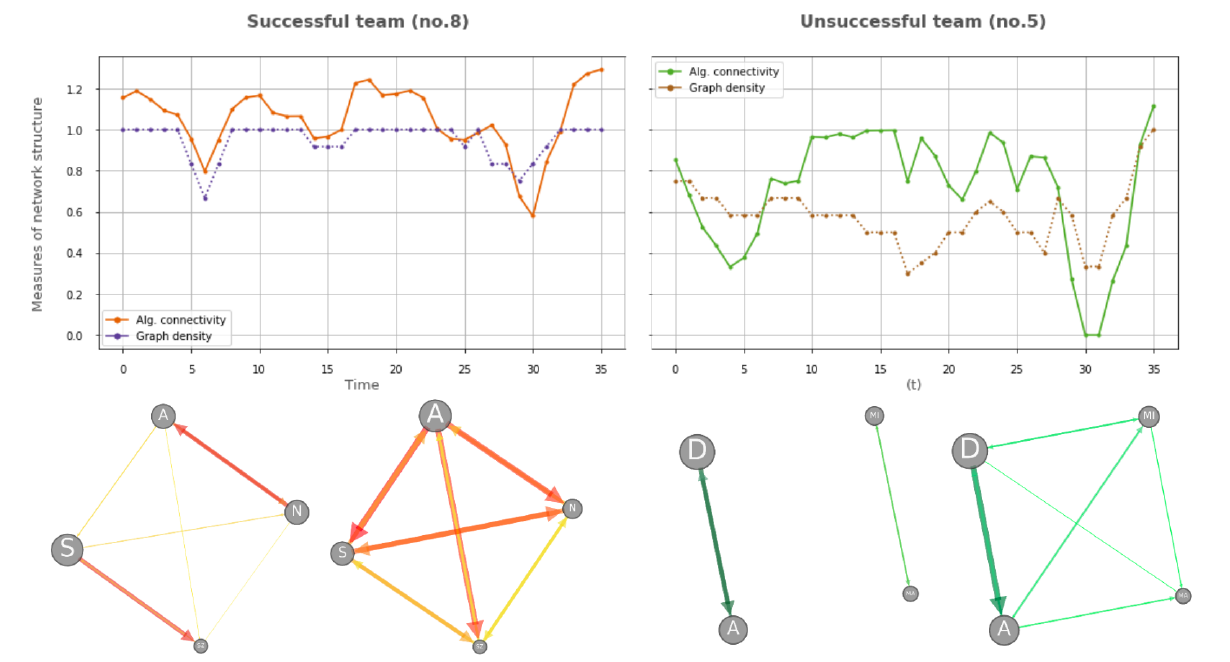 Figure 1: The figure shows the evolution of two network characteristics across time for a representative successful and unsuccessful team. Graph density delivers information purely on network structure but gives no information on the intensity of links. Algebraic connectivity captures combined effect of influenceability (the amount of idea flowing from i to j in a small interval of time) and topology on the speed of reaching consensus.

In her ongoing research, Rebeka’s hypothesis is that less hierarchical teams with a more pliable role structure are more likely to do better in problem solving as flexibility allows constant adjustment of collaborative exploration practices and communication. She also plans to test whether dense networks (implying homogenous distribution of communication ties across team members and across time) tend to foster successful task performance. Moreover, as a further stage of the project, video records could be replaced with RFID sensors or sociometric badges to ease data collection and processing. This advancement might allow to analyze also the content (negative/positive reaction) in the communication links and it would also make it possible to measure consensus formation and team spirit.