Ecological Networks – From Individuals to Ecosystems

How may network analysis help to understand what happens in biological and ecological systems? Ferenc Jordán, group leader and scientific adviser at the Danube Research Institute - MTA Center for Ecological Research in Budapest, explained in detail the potentialities of the use of a complex network approach in Biology. In his seminar at the Center for Network Science, Ferenc presented several projects carried out by his research team, providing a general overview on research questions and open issues in Ecology, and on methodologies used to analyze ecological networks.

Depending on the purpose of analysis and the time (and space) scale of interest, an ecological system can be decomposed in several ways. The ecological-network literature has identified three main levels of analysis: food web, animal social network, and landscape graph. These decompositions describe the system from different point of views, focusing on system view, dominance, and isolation, respectively.

More in detail, a food network identifies who eats who, or in other words, it maps the path of energy in the network. For the same system, different food-network representations are possible, varying element aggregation, node definition, and complexity of the graph. All representations are equally good networks, but they focus on different aspects. The advantages of a network approach are several. First of all, considering the system as a whole allows observing indirect effects, which, in some cases, are more important than the direct ones. A clear example is the behavior of the system composed by Iberian lynxes and rabbits, shown in Figure 1. Despite the fact that rabbits are usually predated by lynxes, their population increases with the number of lynxes. This effect is known as trophic cascade and it becomes evident when we consider the entire food network: lynxes eat also other animals, which are, in turn, predators of rabbits. Therefore, the growth of rabbit population is a consequence of the control of the mesopredators by lynxes. Moreover, the network analysis of food webs is useful to detect the keystone species, the ones whose removal will affect the whole-system diversity. Food networks are also used to identify critical nodes in the system, studying network importance of the different species, missing links and central nodes (preferring a multi-node solution over a single-node rank). Finally, Ferenc and his team studied, through simulations, what happens to the whole system when we disturb a single node of the food web. Analyzing the community response, they quantified the relative importance of the species. 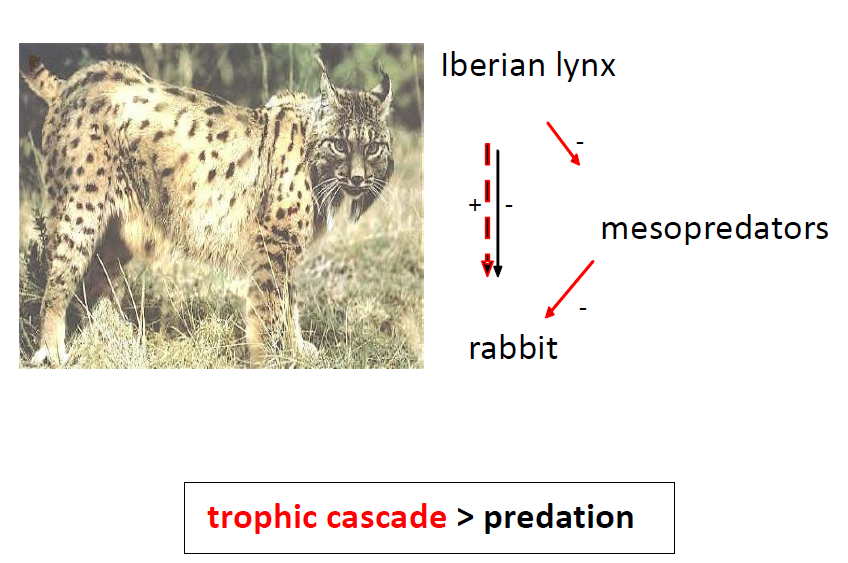 This approach is useful to have an overview of the whole system, but there are other open issues. What happens inside a population? What is the relationship between different age groups? To answer these questions, biologists analyze animal social networks. This kind of networks can be defined considering multiple interactions (dominance and proximity are the most common ones). However, how to combine these interactions and create a single social network is not clear. Moreover, animal interplays evolve over time and they may be positive or negative. The sign and weight of these interactions are hard to define and require a high level of expertise on the species studied.

Finally, Ferenc presented the analysis of metacommunities, performed using a landscape-graph approach. The landscape ecology links several ecosystems (e.g. forests and oceans) and studies the topology of the resulting network, with the purpose of defining better strategies for the conservation of species. The key problem in Conservation Biology is the isolation of species, caused by human activities. The analysis of landscape graph allows to define the degree of isolation of several species at the same time and evaluate the adequacy of current conservation policies (e.g. Natura 2000 network in European countries).

A further step in the study of ecological networks is represented by linking these three levels of analysis: food web, animal social network, and landscape graph. As Ferenc argued, despite the difficulties in considering all these levels together, a deep understanding of an ecological system certainly requires an integrated analysis of all its different aspects. The same individual has indeed an active role at every level: it can be predator and/or prey, socialize and move away. Unfortunately, the lack of good databases slows down the development of this kind of analyses.