Asimov's Foundation - Turning a Data Story into an NFT Artwork

In this work, the authors, Milán Janosov and Flóra Borsi transform the famous sci-fi novel series into a network and then an NFT artwork. The full paper is available on ResearchGate and has been featured in TechXplore.

Isaac Asimov's Foundation series is widely considered to be the best science fiction novel series ever written. The first books are centered on the mathematician Hari Seldon, who discovers a way to predict the future, called psychohistory, baring quite a few mutual traits to today’s data science. With the help of this new scientific field, Seldon founded the Foundations – two groups of scientists and engineers – whose purpose was to preserve and maintain human civilization across the galaxy and its countless inhabited worlds.

Earlier research quantified different dimensions of the book industry from various angles, such as understanding the broader evolution of culture, uncovering the hidden formula behind bestsellers, and capturing the key factors of individual career success. Following this line of work, we first highlight the significance of Foundation in Asimov’s career based on the data available on Goodreads. As such, we construct a time series representation of his career history which enables us to analyze the evolution of his career success over time as shown in the following and in an interactive visualization here.

After pinpointing the overall importance of Foundation in Asimov's career, we aim to understand several quantitative characteristics of the novel series itself using language processing and network science. Namely, we study the Foundation series as a set of textual data and discuss elementary statistical aspects, such as the world-frequency distribution and differences between separate books. Then we focus on sentiment analysis and temporal patterns to curate the emotional arcs of Asimov's worlds (different extrasolar planets of the sci-fi series). In the last part of the analysis, we tame the relatedness of Asimov's worlds by constructing a network of worlds connected by semantic similarities - mutually co-mentioned words, providing a network view and descriptive statistics of Asimov's universe. The interactive network can be explored here and on the next figure. 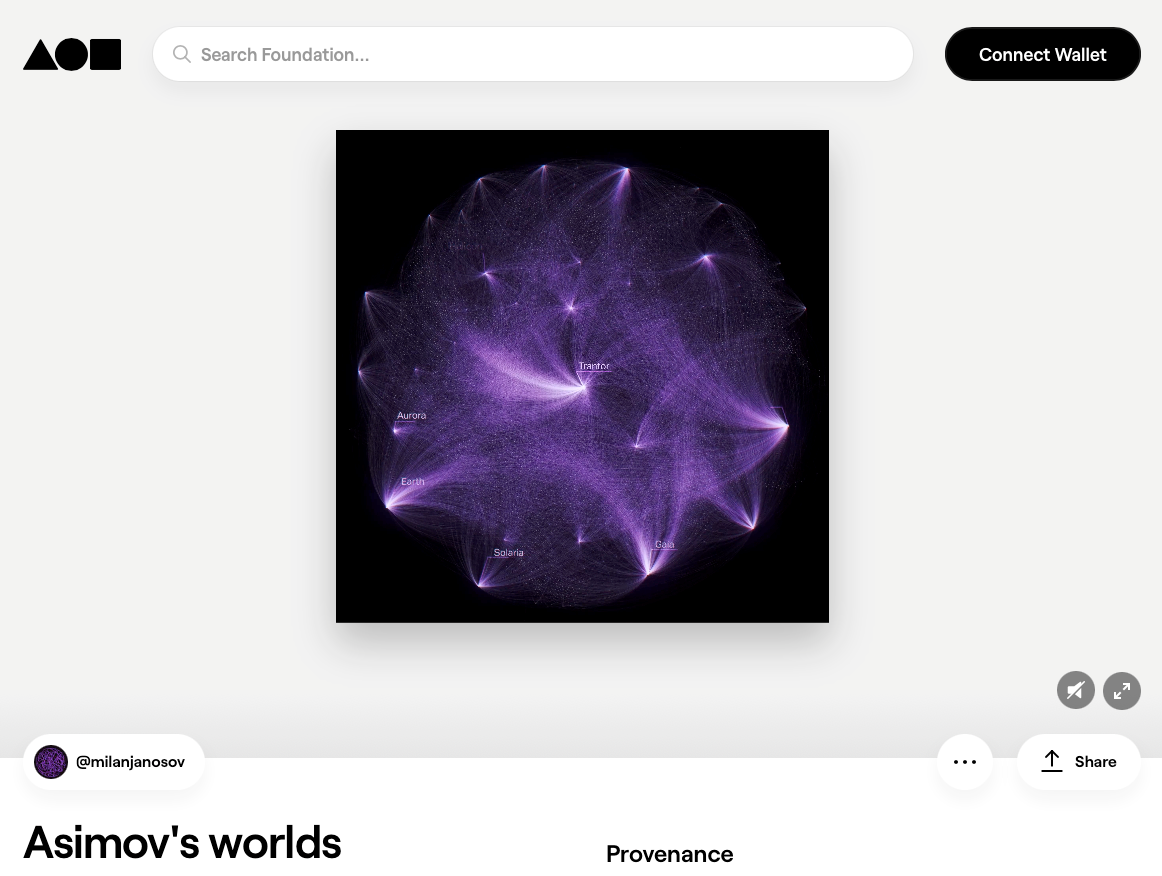 Finally, we connect scientific data exploration to contemporary digital art by transforming a simple network graph into an artistic product, emphasizing how a network graph can convey quantitative insights and bear artistic value at the same time. As a medium, we use the NFT technology that hosts a digital art movement that gained substantial popularity in 2021. This way, our artwork provides a unique experience of the data, and is minted as an NFT on the fitting platform Foundation.app as illustrated below.

In addition, tributing to Asimov's pioneering work on popularizing robotics, we use the beta version of OpenAI's GPT-3 engine's API, which earlier even wrote an entire newspaper article, to draft several parts of this article.

Read more on ResearchGate and TechXplore and check out the artwork the Foundation NFT platform!