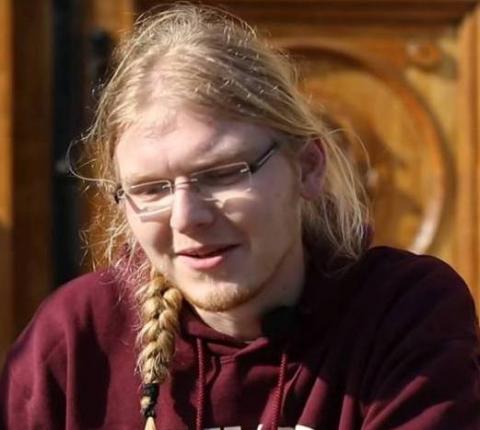 The framework of regulatory networks offers an elegant way to model the complicated chemical interactions happening on the level of genes and proteins in a holistic manner. In his recent talk at DNDS, third year PhD student David Deritei gave an introduction to this frontier research in biological networks as well as his own research in this direction.

The biological regulatory networks consist of nodes representing the different proteins and genes and links characterizing interactions between said nodes (see Figure 1).  Different from static networks, there is also a dynamical aspect of the regulatory framework: nodes have discrete states which change in time according to the states of the neighboring nodes and their response function. In the simple model where the state of a node responds to the states of its neighboring nodes in Boolean functions, the network is called Boolean network, whose dynamic attractors have very good correspondence with specific phenotypes observed in the cell despite its simple structure. Figure 2a shows an example of the Boolean networks where the state of the nodes is binary and the Boolean response functions are shown in Figure 2b.

As illustrated in Figure 2d, the dynamics of a Boolean network is reflected in its state transition graph (STG) where one can identify the different attractors and the intermediate states converging into different attractors. The attractors play an important role in the regulatory network framework since they might correspond with specific phenotypes of the cell. As is shown in Figure 3 the case of a caspase-mediated survival-apoptosis switch, the two attractors in the STG correspond with the survival and apoptosis of the system respectively. To identify the attractors in the state space of the system is generally a difficult task. As the number of nodes increases in the regulatory network, the size of the state space increases exponentially, making the exploration of it very hard. Another problem relates to the noise inside the system, which introduces randomness to the determinate STG. To reduce the size of the state space, Zanudo et. al. [1] propose to look at stable motifs of the network instead. Stable motifs are structural elements responsible for covering a large part of the dynamical landscape. The method of Zanudo et. al. involves extending the regulatory network by introducing extra nodes and links to the system. Using the strong connected component (SCC) in the extended network as a source, one can then recursively find the stable motifs and reduce the regulatory network.

In his work, David will follow the direction of studying stable motifs. In particular, he will look into the effect of Markovian noise in the process of synchronous and asynchronous updating of the states. He will apply different noise models to study the response of the stable motifs to the noises. Another question he will study is the dynamical hierarchy of the system. The fact that the network can be reduced to several stable motifs already reveals that different components of the regulatory network play different roles. What are the relations between the stable motifs?