Results obtained in theoretical network models suggest that the interconnected nature of networks causes qualitatively different behavior and robustness than one could observe examining only isolated subsystems.

In his talk on February 5, 2018, Andras Borsos gave an overview of the structure of his model, which is a coupled contagion model. The main goal of Andras’s research project is to create a microsimulation based environment which is suitable to capture both the interactions between the banking system and other economic sectors and the feedback mechanisms among the agents. Prior literature on contagion models either incorporate only mechanisms within the banking system (e.g. Debtrank, or the contagion model used in the liquidity framework in the Hungarian Central Bank), or they take into consideration the exposures towards other sectors only on the aggregate level (e.g. balance sheet based indicators). Results obtained in theoretical models suggest that the interconnected nature of networks causes qualitatively different behavior and robustness than one could observe examining only isolated systems. Consequently, one can assume that to estimate systemic risks precisely we need to consider the feedback channels between interacting economic subsystems as well (which is not possible to model accurately on the aggregate level). To overcome this shortcoming, Andras proposes to connect two existing streams of economic literature: the contagion models in the banking system and the shock propagation models along the supply chain can be coupled using credit contracts between the two networks. This innovation would make it possible to map systemic stability risks in a more detailed way. Furthermore, this framework could offer several applications for macroprudential analysis.

There is an extended literature about the channels of contagion in the banking sector, however, not all of them are relevant in the Hungarian system. Therefore, Andras’s analysis will focus mainly on data from Hungary. The model proposed by Andras includes interbank lending as it is one of the most fundamental element of liquidity management for banks. Although the volume of the transactions at this market is smaller than in banking systems of more developed countries, it is still worth considering. Another important channel emerges due to the adjustment mechanisms of banks. If a stress event hits an institution, and it needs to make some adjustment in its balance sheet structure to comply with the regulation, one possible action is to liquidate some risky assets. If the volume of the transaction is large enough to influence the price, other banks holding these assets can suffer a loss. This is called “fire sales” channel.

Firms also exhibit more than one type of contagious connections, but the most relevant is typically the supply chain channel: Firms rely on the raw materials and intermediate products from suppliers to produce their own products that in turn are delivered to downstream firms. For instance, a positive borrowing cost shock to loans increases the input cost, which decreases intermediate input demand, since production falls on account of the financial distress, so the shock affects intermediate input suppliers as well (upstream shock propagation). On the other hand, a positive borrowing cost shock to loans increases the production price, which creates supply impact and affects product consumers (downstream shock propagation). These mechanisms can even enhance each other, e.g. a negative demand shock in the car industry to General Motors can trigger upstream shock propagation in the auto-parts industry, which becomes a negative supply shock (downstream propagation) to Ford.

The links between these two networks (banks and firms) are loan-contracts, which can transfer disturbances in both directions. If the banking system is hit by a shock, it might lower its lending activity which can lead to financial problems for firms dependent on bank loans. In turn, if the real economy is declining, banks can suffer losses on non-performing loans or via the lack of demand due to the setback of investments. As we experienced during the escalation of the crisis after 2008, shock events on either of these networks can be easily transmitted to the other. The hypothesis of Andras’s research is that this feedback mechanism could amplify the losses in the economy beyond the shortfalls expected when we consider the interacting systems in isolation. 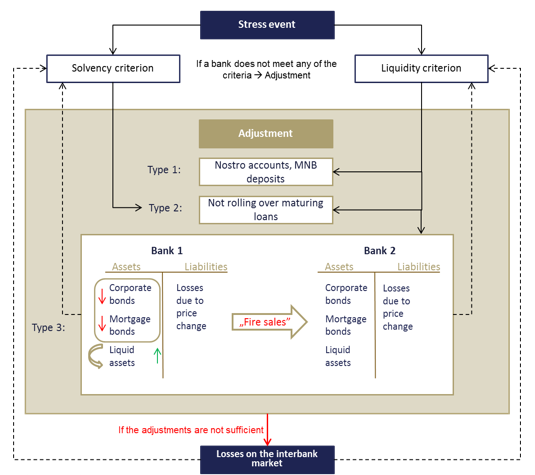 Figure 1. Contagion Mechanism. This chart shows the mechanism of contagion in the proposed model. The primary source of contagion is coming from the classical approach in the literature: if a bank suffers a loss of a magnitude that results in its failure, and thus it becomes unable to repay the loans it borrowed in the interbank market, it causes losses to its partners. The second channel stems from the form of bank adjustment when a bank attempts to improve its position by selling assets whose price may change as a result of these transactions, and thus other banks also suffer losses because of the price loss. As another adjustment mechanism, banks can reduce their lending activity, which is a direct link towards the firm network. According to the logic of the model, contagion and adjustment mechanisms follow one another cyclically until the fixed point of the block is reached as shown in the figure.

During his talk, Andras discussed the structure of his model, the role of networks in the contagion mechanism, the nature of simulations to be conducted and the different data sources that he is going to use to validate his model.