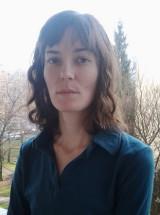 We still don’t know much about the ways personality traits and ego-networks shape each other, though having a deeper insight into the phenomena may have important implications both for the improvement of therapeutic methods and for organizational purposes. Srebrenka Letina, a PhD Candidate at CNS and a junior researcher at the Centre for Educational and Network Studies (RECENS) of the Hungarian Academy of Sciences, is working on the issue, and recently she gave a talk on how her research question has been shaped and reframed by a new application of network science to psychological phenomena.

It seems that a paradigm shift is happening in psychological science as a new, network perspective is introduced by a group of psychologists mostly from the Psychosystem Project group at the University of Amsterdam (e.g. D. Borsboom, E. Fried, C. van Borkulo, S. Epskamp, etc.). What they propose is that many psychological constructs can be considered as complex systems made up of elements which are influencing each other. Although this is different from the long-standing view of psychological traits/symptoms as caused by a latent unobservable trait/disease, it is not incompatible with it. The approach has been successfully applied to the area of psychopathology, where symptoms are represented as nodes and their associations as edges in the network. However, soon afterward it was applied to other research areas in psychology, e.g. personality traits, intelligence, attitudes.

Letina used the dataset of many different psychological traits of over one million people (collected in the myPersonality Project (Stillwell & Kosinski)) to illustrate some of the methods developed in this new framework: techniques for the estimation of networks, regularization methods employed, centrality analysis of nodes in the network, comparison of different networks, the use of community detection on the item level of a questionnaire, etc. One of the most interesting findings is that the 30 facets of the Big Five model do not cluster neatly in five separate clusters, as it would be expected. Furthermore, there are no gender or age group differences in the network structure of those 30 facets. The most central facet of the Big Five network is Anxiety.

Letina also constructed the network of different psychological constructs, where Emotional Stability was shown to be the most central node (for more details, see the link with interesting visualization). However, when a different personality framework was used – Cattell’s 16 personality factors (using other available big datasets), the factors related to high anxiety were not the most central ones in the network. Additionally, although the network structure of items in a questionnaire about depression symptoms did not differ between high and low score groups, some of the edges in the network (association between a pair of items in the questionnaire) were significantly different.

After this “introduction and demonstration” of network psychometrics, Letina returned to her starting question about the relationship between psychological attributes and social networks with a different view: Instead of asking how certain psychological attributes affect certain network measures of an individual, we can pose a different question – How different psychological systems are affected by certain variables related to social network measures? The idea that when investigating a psychological system, one can include other variables that describe network ties or other relevant concepts has already been proposed in this network psychometrics field by some researchers (e.g. Borsboom (2013), Jones (2017)). The challenge will be how exactly to analyze the differences in the properties of a psychological system in relation to different variables, and how to use this approach to advance the theory in this field.

Moreover, there are some important advances in social science methodology that should and could be incorporated in this approach – namely, the big data and reality mining data. Those non-traditional data sources may be even more amenable to network approach, especially when temporal information is included. In conclusion, the integration of network science and psychology seems to hold great promise about investigating new research ideas, but also about reframing the old ones, as was the case with Letina’s research question. Both network science and psychology could benefit from this fusion in the advancement of their theory and methodology.