The interactive visualization by Tamer Khraisha is available on Tamer's blog.

Personality is a complex system, which is often described by psychologists using different constructs like traits, motivations, emotions, attitudes, beliefs, abilities, etc. However, personality system is not just the accumulation of those constructs, it has organization and process, shows patterns, and it is placed in other systems - physical body and social environment.

In this project, our goal was to explore the nature of associations between different personality attributes using a network approach. Differently from the traditional approach used in psychology, i.e. the latent variable model, according to which traits cluster together because of shared origin, in the network approach traits cluster together due to the influence they have on each other. Most of the studies done so far have examined the networks of facets within certain psychological concepts (e.g. attitudes, psychopathological symptoms of a particular disorder, intelligence).

We used the data collected in the My Personality Project (Kosinski & Stillwell, 2007-2012) about individual scores on many different psychological questionnaires to construct the network of 25 traits. The total sample size was over one million of people, from over 200 different countries.

Our research interest lied mainly in studying the associations between different psychological constructs, and therefore we expected low correlation coefficients, given that most of those constructs are constructed to be more or less independent. The sample size on which the smallest pairwise correlation is estimated was 1879, while the median sample size was 4319. The correlation network consisted of 255 edges – that is, 255 significant correlations, after the appropriate transformation of skewed distributions and permutation tests based on N= 10 000. The procedure we used for constructing the final network is called (G)Lasso technique (R package qgraph by Epskamp et al., 2012), described in details in Friedman et al. (2008), Epskamp & Fried (2017), Epskamp et al. (in press). This technique resulted in a sparser network, by setting some of the parameters (edge weights) to zero, while restricting the magnitude of other parameters. The tuning parameter lambda was set to 0.25 and sample size was set to reflect the smallest pairwise sample, resulting in a network of 229 edges. For details about the edge weights, please see the interactive visualization. Average degree in this network was 18. 32, and transitivity was 0.79, with small world Index of 1.181.

Additionally, we conducted centrality analysis of the nodes in the network, which resulted in useful information on the systemic effect one attribute can have on the other nodes. Figure 1 shows the results, with three standardized centrality measures (degree, closeness, and betweenness). Emotional stability (reversed Neuroticism) seems to be the most central trait in this network, implying that change in this attribute (due to stress or therapy, for example) would lead to the biggest changes in the network. At the same time, it may suggest why this attribute could be difficult to change, as it is the most connected with other parts of the personality system. Depression (reversed) and Conscientiousness seem to be among most peripheral nodes, implying that change in those attributes would not lead to substantial changes in the other traits. However, three issues should be taken into account when interpreting these findings. First, is the use of cross-sectional data, based on interpersonal associations, to arrive at some conclusions about what may happen within a person (intrapersonal associations).This means that we should be cautious in making strong statements, and we should treat it more as a way to generate new hypotheses that could be tested with longitudinal data. 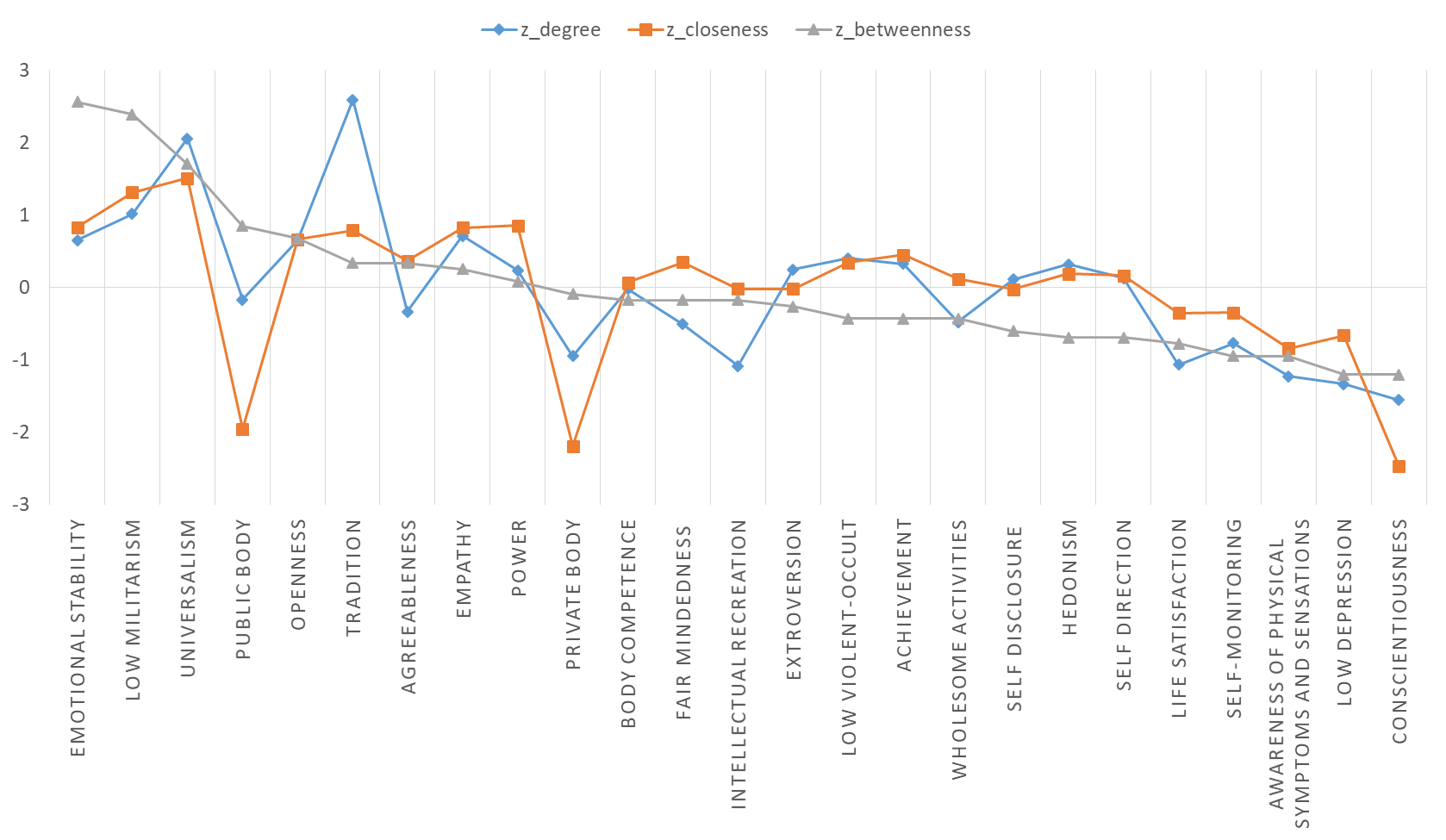 Secondly, it should be noted that we did not control for the fact that some of the nodes were expected to be more highly connected with others within their group (e.g. values). Lastly, at present we are showing the network based on all available data, not controlling for possible differences in connection patterns that could be due to gender, age, etc. In conclusion, in the network of different kinds of not-highly related traits, Emotional Stability is the most central trait. We believe that this approach can be used fruitfully in combination with other kinds of data, and provides richness and flexibility in accounting for complex personality structure (see Mottus & Allerhand, 2017).