Social Networks and Collective Behavior in Online and Urban Environments

Michael Szell, Associate Professor at the Center for Network Science, gave a lecture about his previous research done in collaboration with researchers from CEU, Northeastern University, and Complexity Science Hub Vienna. It covers two lines of topics: social networks in online environment and collective human behavior in cities.

In the first, he used a large dataset of different kinds of interaction of more than 400,000 registered players of Pardus – a virtual online society. In Pardus virtual society, there are no rules and goals and members can participate in economic, social or/and exploratory life of the society. Although Pardus was not designed for research, it offers important and novel insights about the functioning of a social system. Therefore, this unique set of data could be seen as a “Social Petri Dish”, which allows investigating complex social behavior like emergence of hierarchical groups, cartels, banks, political parties, e.g. Since the data spans over 15 years and includes interactions of different kinds, it gives opportunity to investigate multiplex and temporal networks. So, not surprisingly, much interesting research has been done and published by Michael and his collaborators. For example, by analyzing positive (friendship, communication, trade) and negative (enmity, attack, bounty) interactions between actors in the system, they found the existence of structural differences in the distribution of negative and positive ties, which could imply different social mechanism underlying those fundamentally different social interactions.

Importantly, Michael’s research has shown that by ignoring the type of relation could result in loss of essential information about the system. Furthermore, the well-known social balance theory was tested on this unique dataset, and findings about the overrepresentation of balanced triads and underrepresentation of unbalanced triads gave support to the postulates of social balance theory. Several papers on this dataset cover other interesting subjects like social dynamics, triadic closure, mobility, elite structures, and predictability of behaviour. In the paper of gender effects, researchers found that females and males manage their social networks in substantially different ways: females have more communication partners, who are less connected than partners of males (Figure 1). However, there are many other promising avenues for future research including the spread of diseases, clustering of industries, etc. 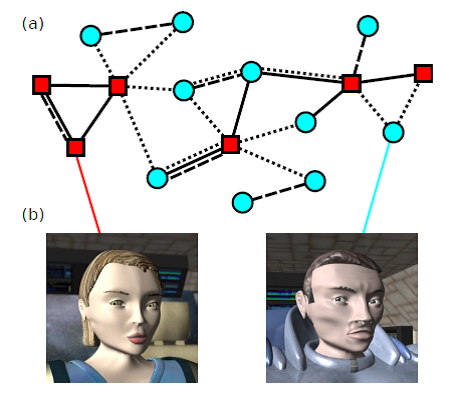 Michael’s second line of research focuses on a different kind of network that describes collective human transportation-related behavior in cities and tackles the issue of efficiency of urban transport. Specifically, by analyzing a real-time dataset about taxi service in New York during a one-year period (more than 13,500 cabs and 400,000 trips per day, Figure 2), Michael and his colleagues were able to visualize the data and arrive at some important insights like the fact that the majority of trips could be shared with minimal passenger inconvenience, which could lead to more efficient use of vehicles and decreased pollution, among other benefits. The important practical implication of the research is reflected in the implementation of trip-sharing in some taxi services (e.g. Uber, and for interactive exploration of sharing benefits look up the online tool - hubcab).

Finally, Michael presented the work on “What the street?!” project in which he looked at the distribution of space for different modes of transportation in different cities (e.g. Chicago, Copenhagen). Although each city displays a unique pattern of distribution of space for different modes of transportation, a disproportional majority of space is allocated for cars (so-called “The arrogance of space”). Starting from those insights, many important issues in urban mobility (shared vehicles, bicycle networks, policentricity) could be investigated and they offer an opportunity to arrive at sensible and practical guidance, even policy changes, from network science research.

However, as Michael pointed out, predicting the implications is not so straightforward. Indeed, some unintended consequences are possible (e.g. less investment in public infrastructure), reminding us all that when we are dealing with only one part of a system, we should be aware of the wider system to which it belongs to.