The 7th season of Game of Thrones, which brought much unexpected news and started countless debates – and naturally killed some important characters – is over. So here is the first chance to validate my previous prediction on who would possibly die in the show. 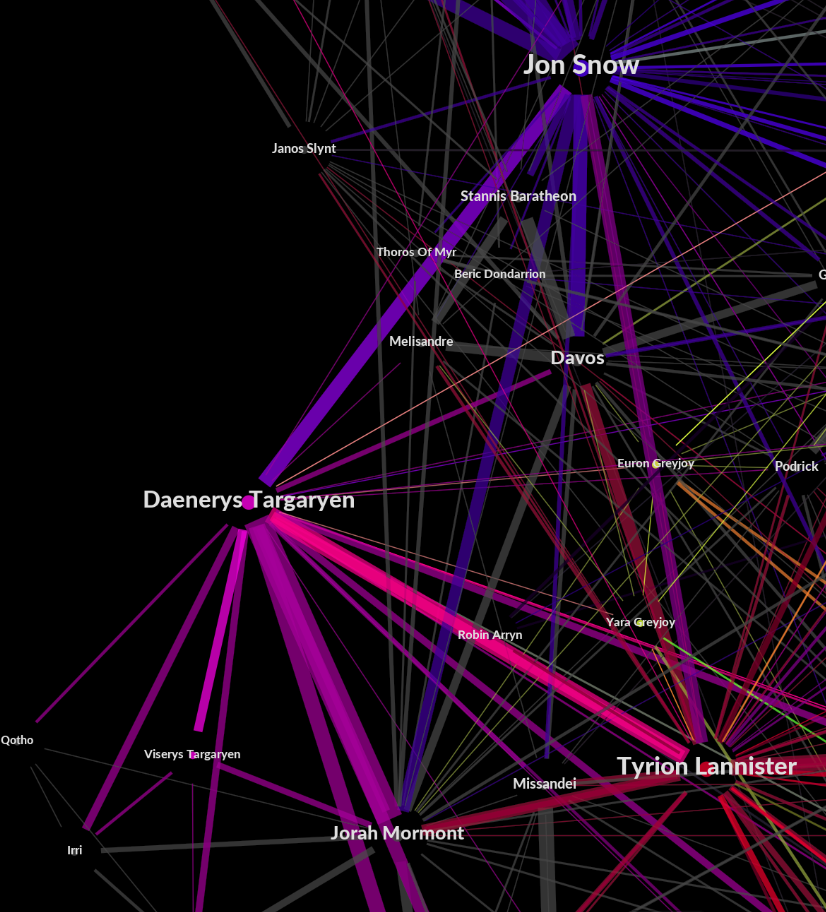 What has happened so far?

In the former blog post I used the TV dhow's episodes to create a social network of the realm of Westeros, determined various centrality parameters of both the dead and the living characters, and used a support vector machine model to predict the likelihood of each living character to die. The result came in the form of a list of characters ranked by their chances to die before the end of the series. My prediction disregards time: it does not foresee whether a character would die right away in the first episode or just at the very end. Thus, even though the final season is still to come, I would like to discuss the preliminary results of the model.

The previous prediction covered the fate of 34 well-known characters, the majority of whom appeared in the new season as well. However, only four of them have died so far, which, if the deaths had happened randomly, would mean an approximate 11% of chance of dying for all the characters. Despite the model's limitations and simplicity, it has done a fair job: predicted the death of the first on the list, Tyene, as well as Olenna Tyrell and Petyr Baelish; however, it failed to forecast Tyene’s sister’s death. On the other hand, it was right to assume that Jorah somehow would find the cure for his (thought-to-be) lethal sickness and survive. Likewise, it was correct about Theon: despite all he has been through, he still carries on. 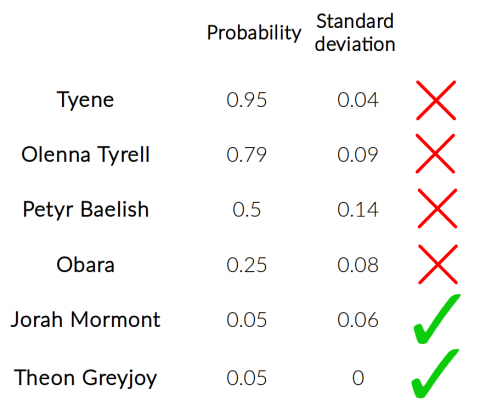 Table 1: The characters most seriously affected by the new season and their predicted probabilities to die. Red cross means the character passed away in the new season, while the green tick indicates its survival.

Using the previously introduced methodology I also calculated the current ranking of characters based on their probability to die, which as a light spoiler can be found at the end of this post.

The most important event is unquestionably Daenerys’s meeting with Jon, and their encounter with Cersei – this is how the previously unconnected domains of this network (Figure 1) finally got connected (Figure 2). This  establishes many new connections and transforms the original social network, which also changes the characters’ predicted future. The filtered network of the central characters based on Seasons 1-6 can be seen in Figure 1, while the network of Seasons 1-7 is in Figure 2. The nodes represent characters with size proportional of the total strength of their connections, and the colors code the great houses appearing in Season 7 (blue – Stark, red – Lannister, magenta – Targaryen, green – Tyrell, yellow – Greyjoy). 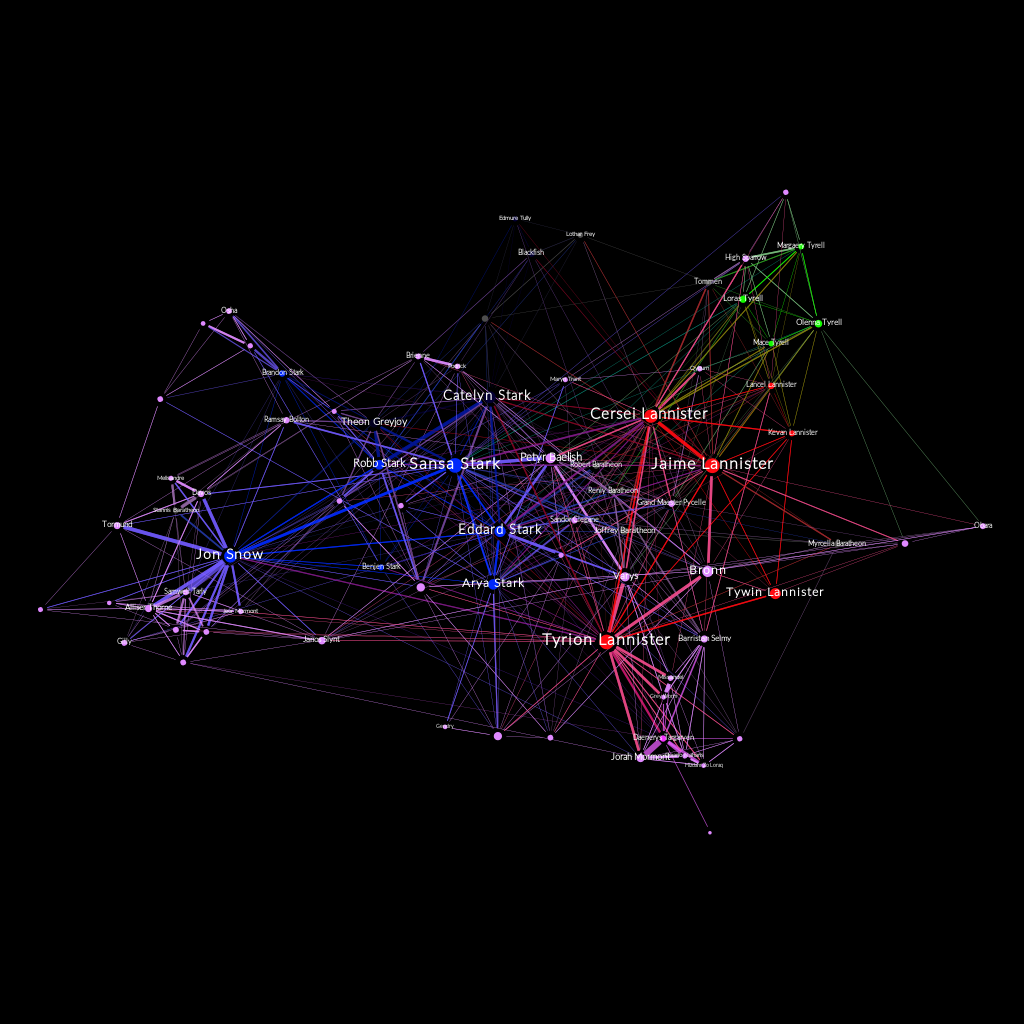 Figure 1: The social network of the Game of Thrones realm based on Seasons 1-6, filtering out the less important characters. The size of the nodes is proportional to the strength of the nodes, while the colors are assigned to the great houses. 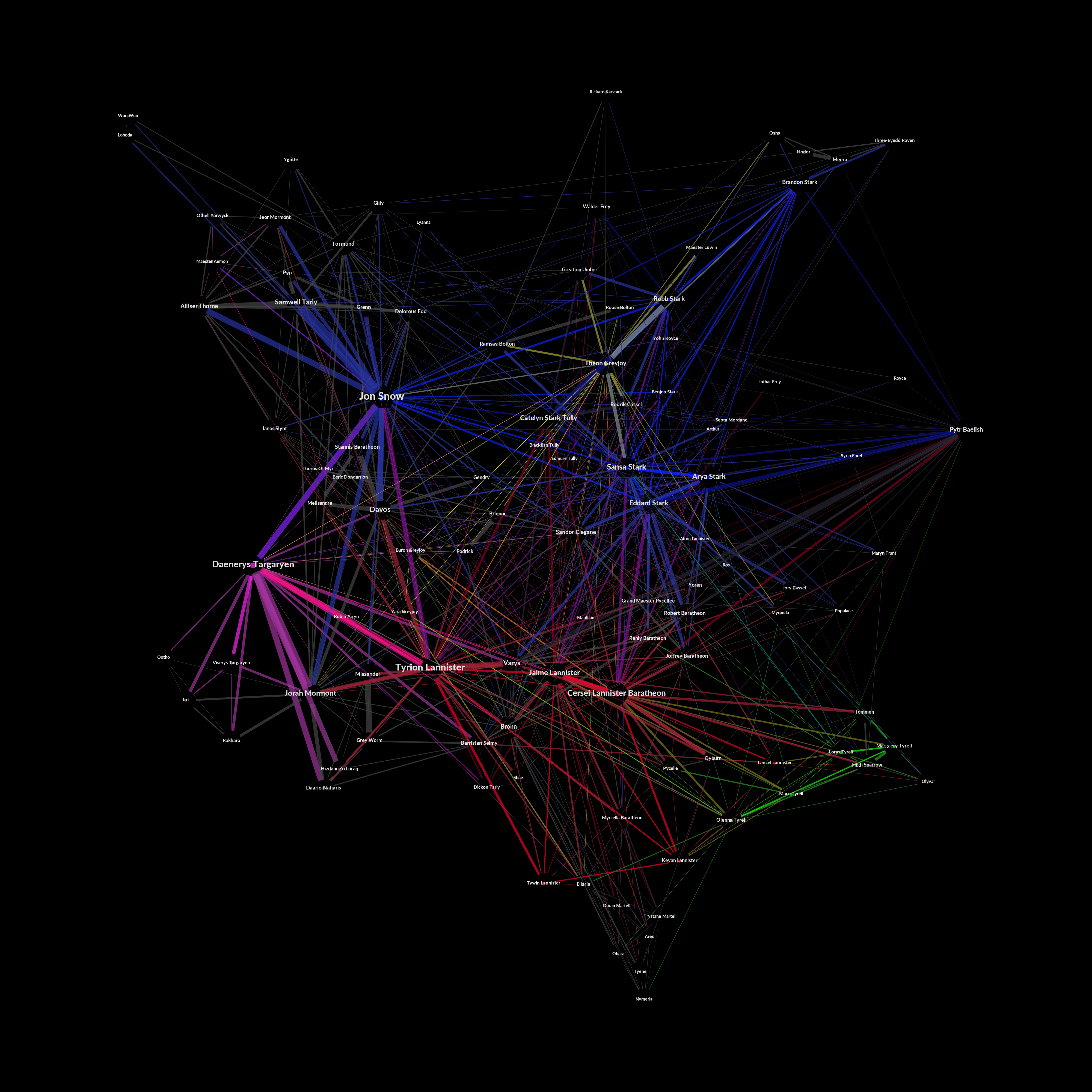 From the list and the network we can deduce several things:

1. Jon being the most important character based on almost all network measures;
2. Bran is finally close to the action which seems to promise a bad future for him;
3. Daenerys apparently made enough influential friends to make it through; however, those around her might get sacrificed on her mission;
4. people around Cersei are disappearing (see a much smaller red region, which resembles the Lannisters, in Figure 2), which influences the probabilities for her and those close to her;
5. Theon and Jorah have a good chance (perhaps based on previous experiences) to survive; and
6. it seems Tormund, a favorite wilding to many, may not only escape from the falling Wall but survive the entire war.

Table 2: The current ranking of the major characters based on their probability to die. The red triangles indicate that their rank moved up on the list (they are more likely to die due to the events of Season 7), while the green triangle means they got into a safer position comparing to the one after Season 6.