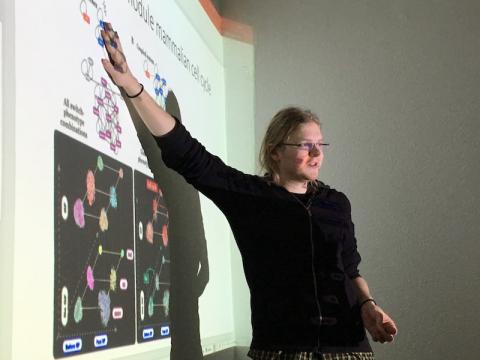 Dávid Deritei, second year PhD student of Network Science, held a presentation about the work he has done on biological regulatory networks in collaboration with Erzsébet Ravasz-Regan from College of Wooster and colleagues from the Hungarian Physics Institute at Babes-Bolyai University, which was published recently in Scientific Reports.

In this interdisciplinary field, interaction of molecules, as interaction within single cells are examined by using network science perspective in aim to understand better how malfunctions that are causing diseases happen. Specifically, Dávid focused on questions how cells create discrete, modular and functional parts and how such small circuits function within the larger system. He used system dynamics approach with bottom-up view and tools from Boolean networks. Genes and proteins are viewed as “switches”, nodes in Boolean networks that regulate each other.

In the second part of the lecture, Dávid presented the framework of his PhD thesis research, where he combines network science (specifically, by employing Bayesian networks) and cognitive science in building models about perceptual learning in humans. Dávid’s work shows the interdisciplinary (or better yet, transdisciplinarity) of network science, and how important questions in traditional disciplines can be tackled in new and promising ways with paradigms and tools developed within network science.