WiDS Budapest Organized for the 2nd Time at CEU

See a short video about this year's speakers:

How It All Started

WiDS Budapest was initially organized by another university in 2018, where Orsolya Vásárhelyi (PhD Candidate in Network Science at CEU) was invited to speak, and decided right after the event that she wanted to organize it next year, and make it bigger and a bit more international and technical. So in August 2018, Orsolya asked Júlia Koltai (Visiting Professor at Department of Network and Data Science), whether she wanted to help her organize a tiny, afternoon-only event at Central European University, at the same time as the Stanford event took place. And Júlia said yes. 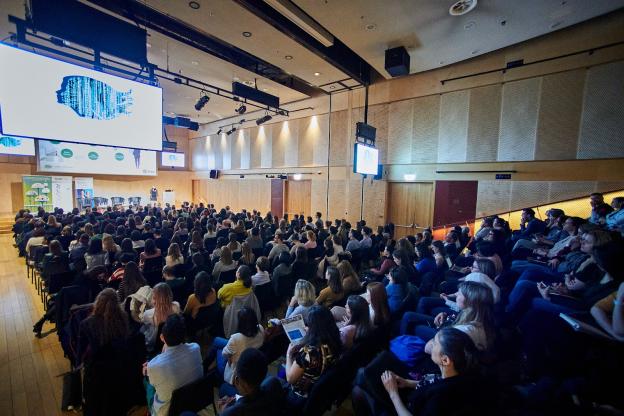 Hunting for speakers who are women, Hungarian or lived in Hungary and can fluently talk about their cutting-edge research in English was not easy in the first year. Invited speakers had big-time impostor syndrome, some of our targets did not accept our invitation, saying that they were not good enough, maybe next time. It made us even more determined that this event was needed very much.

The first event turned out to be amazing, we sold out 200 tickets in 2 hours, so we needed to extend our capacity and get more sponsors. We had a full house (400 attendees) in 2019 with 5 amazing speakers, a panel discussion and a networking event sponsored by local branches of international tech companies.

So in 2020, we aimed higher. We added a poster competition for students and released an open call for a junior speaker, who got mentorship to prepare her talk. It is very important for us to keep our event free, therefore we gathered more sponsors this year. We also worked on getting more publicity: we invited the local media, created professional video footage, and even hired a photographer (look at those pictures, it was really worth it). We also had an army of volunteers, without whom we could not make this event happen: they were absolutely amazing. 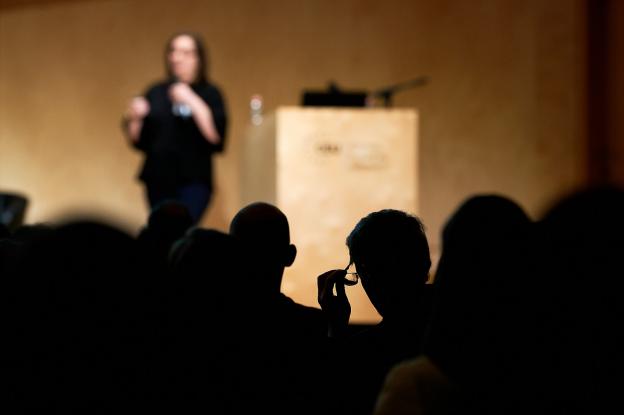 Our first talk was a technology vision talk by Edina Heal, ex-country director of Google and founder of a charity to promote equal treatment of women at work. She talked about the role of diversity in innovation. After her talk, we live-streamed the opening from Stanford. The streaming was followed by our keynote speaker, Bobála Fehér, senior data analyst at one of Hungary’s most influential tech companies, Prezi. She shared how AB testing works in her team. This section was rounded off with a talk by Ida Urbán, the winner of the junior speaker competition, who has just finished her MSc program in statistics and data analytics. She talked about her ongoing project to develop an application for the blind that can read out handwritten complex mathematical formulas with the help of AI.

In the second section of the conference, our first speaker was Márta Radó, a Hungarian researcher at Erasmus MC, University Medical Centre Rotterdam. She introduced a special methodology with which they could measure the effect of smoke-free legislation on child health. Our last speaker was Silvia Fierăscu, a lecturer at West University of Timisoara, who presented her expansive data project on Corruption Networks in Public Procurement across European Countries.

The last program was a panel discussion, led by Orsolya Vásárhelyi with three women, Ildikó Barna (Professor at Eötvös Loránd University), Virág Ilyés (Ph.D. student at Corvinus University) and Marietta Le (Senior advisor to the Mayor of Budapest on Citizen Participation), who had all attained great achievements with data science for social good.

Our networking event after the conference started quite late, at 9:30pm, but surprisingly, most of the audience was still with us at such a late hour! Even at 11 pm, when they had to close the building, we had to ask people to leave as everyone was still talking. 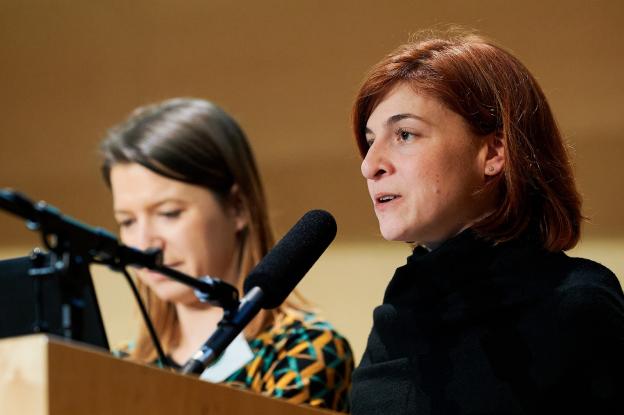 Júlia Koltai is an Assistant Professor at ELTE University Budapest, Faculty of Social Sciences; a research fellow at the (ex-)Hungarian Academy of Sciences, Centre for Social Sciences; and Visiting Professor at Central European University. She originally graduated as a sociologist, survey statistician and defended her Ph.D. in 2013. Her research interest has always been on quantitative data and network analysis, and in the latest years, she turned to data science and has conducted and led several computational social science projects. She regularly publishes in Hungarian and international scientific journals. She is also the co-founder of the business consulting company, BoldY, which offers natural language processing based analytics for empowering strategic decisions.

Orsolya Vásárhelyi is (hopefully) a soon-to-be Ph.D. in Network Science at CEU. Her research focuses on how unconscious gender bias and gendered network formation influence success in technical fields. She had the privilege to participate in fellowships such as the Data Science for Social Good and Bridge Budapest. Besides academic research, she has 10 years of experience as a data scientist, project manager, and consultant. Beyond her dissertation, she is currently working with nonprofits on how to utilize data for urban development, sustainability, and gender equality.

Olga Peredi is the Department Coordinator at the Department of Network and Data Science, CEU. Olga holds an MA in English Language and Literature from ELTE and a BSc in Psychology from The Open University. Nothing would work without her, no sponsors, no food, no speakers from abroad.