Network science as an emerging field has great potential in numerous disciplines. Srebrenka Letina, a third-year Ph.D. candidate at DNDS and junior researcher at Centre for Educational and Network Studies (RECENS) of the Hungarian Academy of Sciences explores these possibilities in the field of psychology treating psychological constructs as complex systems. Researching several topics in the theme of the intersection of network science and psychology, she presented one of her recently published work about methods for psychological network analysis (open access to full pdf).

In the past decade, there has been a “small network revolution” in the field of psychology, which resulted in exponential growth of published research that uses network theory and methods in studying many different psychological constructs. Although the approach is still “young” and therefore suffers from some limitations, it is complementary and enriching to more traditional approaches in psychological research.

The aim of her research is to enrich the understanding of the structure and relational factors in psychological networks that has been mostly limited to centrality and global network feature so far. Doing so, Letina and her co-authors propose three methods expanding the network methodology on this field that all give a novel insight into the topology of the network of psychological attributes.

The first introduced method was minimal spanning trees. As Letina explained, minimal spanning trees identify the hierarchical organization of network nodes (psychological attributes in the presented case) by filtering out the edges (correlation) that carry the most essential information on the similarity of the nodes. These alternative metrics for detecting centrality in the network displayed Empathy as the most central attribute that is the most similar to all the other traits on this illustrative dataset, as the Figure below shows. 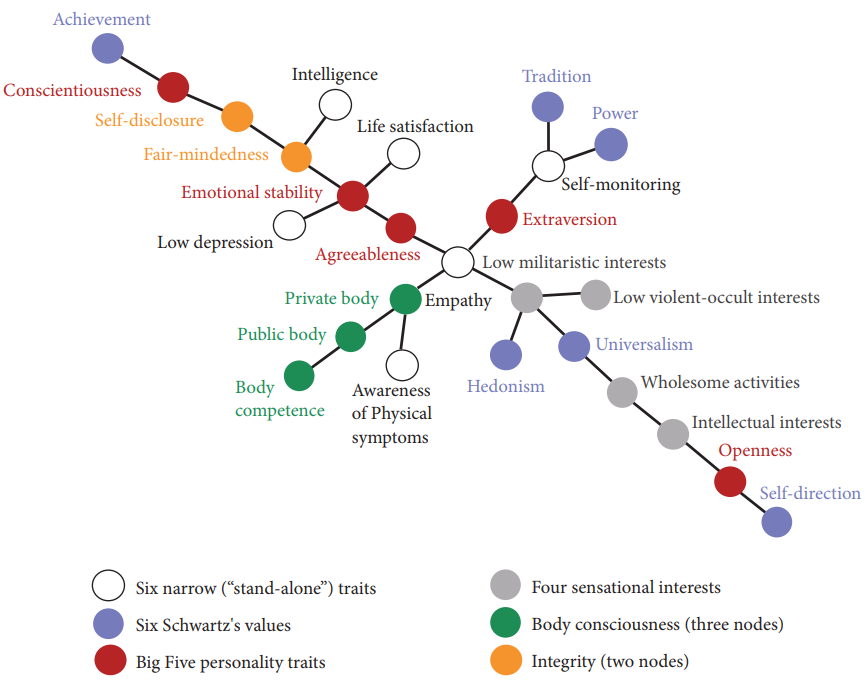 Letina also highlighted the additional insights that the application of MST can provide, such as testing the robustness of network estimation or the detection of possible clusters of attributes represented as different branches of the tree.

Applying the participation coefficient on the defined communities Letina and her co-authors were able to point out specific nodes having equal importance to the network structure. Interestingly, Intelligence seemed to be equally associated with other nodes that allowed the researchers to create a bridge between cognitive abilities and personality traits. Also, results of different centrality measures and analyses converge to the conclusion that in this particular network Empathy may be considered the most central trait, sharing that place with Extraversion and Emotional Stability (“The three E”).

Motif analysis as the third presented method was employed with the aim of exploring to what extent this psychological network resembles social networks in terms of three-node configurations and the balance of negative and positive edges within triads. The applications of these network methods to the analysis of psychological networks show that there are still many unexplored and potentially useful ways to investigate the relationship between psychological attributes represented as a network.

In the second part of the talk, Srebrenka presented a theoretical and analytical framework for studying the co-occurrence of mental disorders via network approach. This research is currently under way, and it holds promise in better understanding of the psychopathology structure and properties of psychiatric nosology.

As a conclusion of her talk, Letina highlighted the range of further possibilities in the integration of psychology and network science from which fusion both disciplines could greatly benefit.