The Micro-Dynamic Nature of Team Interactions: Who’s Gonna Be in Charge? 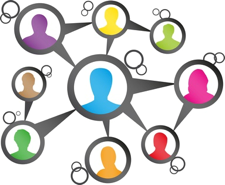 Study of team dynamics is a quite intensively exploited area of research, which lies at the crossroads of sociology, social psychology and computational social science. And the fact that the findings of such investigations are oftentimes applied in various team-building and collaborative settings makes it ever more compelling for general public, which otherwise might not be too interested in scientific outcomes. Nevertheless, even though the patterns and mechanism of team dynamics are actively studied at least for several decades now, there are still many more questions than we have answers.

In her ongoing research, Rebeka O. Szabo, PhD student at the Department of Network and Data Science, has set out to explore the micro-dynamics of team interactions and the emergence of leadership in real-life ad-hoc collaborative settings. Importantly, her research will be carried out by employing network science methodology and techniques. For me, one of the most appealing aspects of the research project is the environment -  group dynamics unfold basically in real time while teams try to make their way out of an escape room. As many of us might know, the situations in such scenarios can escalate quickly and even turn quite tense, which puts additional emphasis on the efficiency of team communication under pressure.

The mechanisms of communication flow and emerging leadership in such ad-hoc scenarios - where the tasks require full-on cooperation to be solved - make for a fascinating research problem definitely worth investigating. As to the specifics of the study, Rebeka aims to use a novel interpretation of Input-Process-Output model proposed by Hackman in 1975. Based on conceptualization of a team as an emergent complex system - and we can fully agree that successful teams are inherently more than just a mere sum of competences of its members - Rebecca is going to focus on the level of relationships within the groups. The opportunities and constraints, which arise as a result of different patterns of such relationships, will be in the main scope of analysis.

Another crucial aspect of the project is its departure from the tradition of examining teams as static snapshots of networks at a specific moment of time. As Rebeka justifiably points out, such limited approach often results in bias and loss of research power. Instead, the investigator is going to focus on temporal dynamics and evolution of links (relationships) within the teams and how the self-organization occurs across the time dimension. While introducing more analytic and computational complexity, this approach will allow to unveil and quantify previously missed patterns or phenomena not accounted for.

Granted, the research is very much a work in progress, but it already shows a lot of promise and potential to eagerly look forward to. At the end of the road, Rebeka’s scientific endeavor will result in a novel outlook on the underlying patterns of team micro-dynamics evolving through time, and, quite possibly, provide the applicable toolbox for achieving that efficient collaborations in small, ad-hoc assembled teams.