The International Network of Weapon Trade

Which countries are buying and selling the most weapons? How does the global weapon trade network look like and how has it changed over time? Network visualizations of the international arms trade flows can go a long way to answering these questions.

The data for this project comes from the Stockholm International Peace Research Institute’s Arms Transfer Database, which documents all international transfers of major conventional arms since 1950. It is the most comprehensive publicly available source of information on international arms transfers.

We consider the data as a temporal directed network. This means that each observation, namely a flow of arms from one country to another in a given five-year period, is a link. The links encode both direction and weight: if Country A sells $1,000,000 of arms to Country B in 1980-1985, we draw a link from A to B with thickness proportional to the value. Nodes are organized hierarchically: we can combine the flows between countries into flows between regions of the world. The temporal window ranges from 1955 until 2005 and is broken into 5 year chunks, leading to 11 networks. 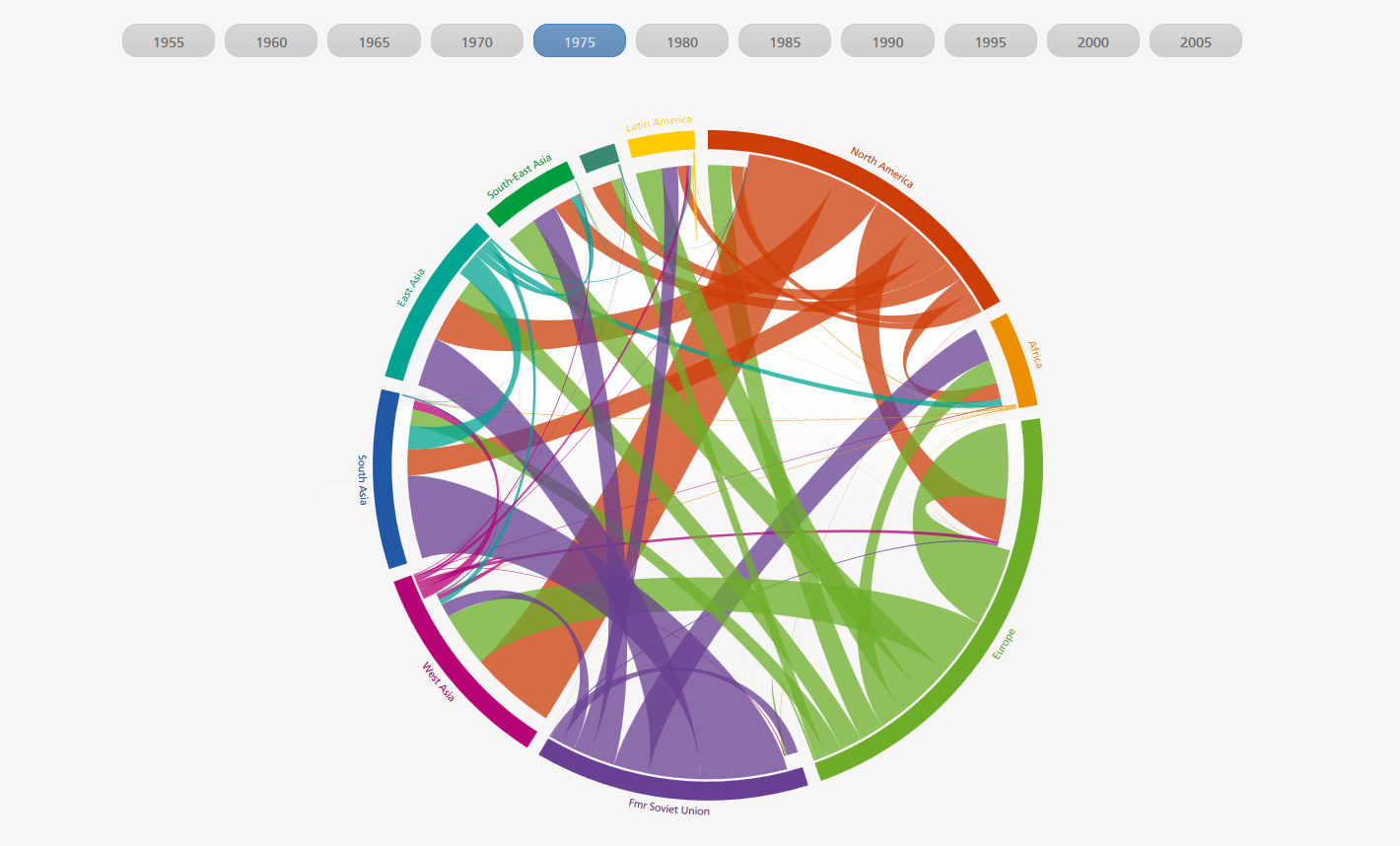 The visualizations are in the form of chord diagrams, a graphical method of displaying the inter-relationships between data in a matrix. Chord diagrams are a useful visualization tool especially for visualizing dense, weighted and directed networks like trade, migration flows, and commuting between geographical locations.

Each visualization can be accessed by clicking on the buttons marked by years. The default visualization is by region, of which there are 10. By hovering the mouse over each region it is possible to see the aggregated flows between the regions. The amount of trade can also be seen by hovering the mouse over the chord connecting two regions. Amounts are expressed in US dollars. To go one level lower and explore the flows at the country level you can click on a segment (region name) to switch between country and region view. To go back to country view click on any country within the region.

The visualizations can show us many interesting stories about the international and geopolitical situation across the second half of the 20th century. The weapon trade network is not random, rather it has a structure that reflects strategic interests and international alliance networks. One limitation of the data is that it does not contain any information about the weapon trades between the former Soviet Union and the other countries before 1985. Follow 1985, however, the arms race between the former Soviet Union and the United States tells a very interesting story. Together the United States and Russia (former Soviet Union) account for a significant share of weapon sales. These sales indicate the alliances of these two countries. For example, the United States sells mostly to its allies in the Middle East like Israel, Saudi Arabia, and Turkey, Japan and South Korea in East Asia and Pakistan in South Asia. On the other hand, the former Soviet Union (Russia) supplies India, Iran, China, countries like Venezuela in Latin America and some African countries.

Another interesting trend to watch is the change in weapon supplies and trades based on the political situation between countries. For example, Hungary used to buy weapons from Russia until the year 2000. After that it shifted its purchases to the US and Europe. Hungary joined NATO in 1999. Similarly, Iran bought many weapons from the US until the 1980s, no doubt because of the anti-US, anti-western revolution in 1979.

Another interesting finding to see is over two thirds of weapon trades come from just five countries (US, Russia, China, UK and France) which happen to be the five permanent members of the United Nations Security Council.

The visualization can tell many other stories about the weapon trades. As it is perhaps the most interesting part of the visualization, I leave its exploration to the reader.